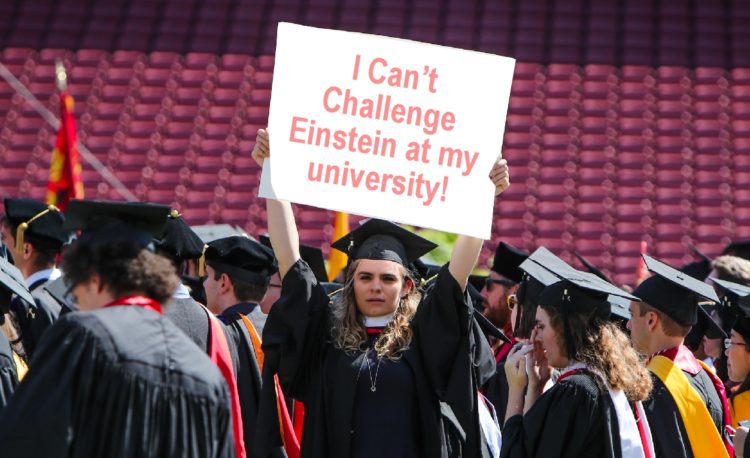 Try this: go to your local university physics professor and tell them you have an experiment to show Einstein wrong and you want to perform it for a masters or PHD thesis. Or, tell them you want to write your thesis on how the Big Bang is wrong. What do you think will happen?

In every university in every physics department on planet earth, you will be told you cannot do that. If you fight, you will be out.

Public Perception about Universities and Science are Wrong

When making my documentary film, “Einstein Wrong“, people would often comment that they never heard about any problems in mainstream science or in particular, Big Physics and Big Cosmology. I would then respond that data often contradicted Big Science’s claims including Einstein’s relativity and their standard answer was very revealing.

They told me that if there were problems with theories, scientists or professors in universities would look at the problems and either fix their theories or come up with new ones to explain the contradicting data.

They were shocked when I told them that those who have tried to challenge current theory in universities, were not allowed to do so and were even expelled. No one seemed to know this fact and most were surprised, shocked, and many did not believe me.

The truth is, it is not only Big Science that stifles progress in their field, during the last few decades talking with people, I have discovered that many fields in academics stifle any dissent among its students and faculty which goes against everything that our higher level of education should be.

In 2018, I decided that our group, the CNPS should start our own online university to combat the problem of stifling any dissidence towards long-accepted ideas. Whereas in business and in industry, innovation or disruption is key to advancement, simply is not so in many areas of study at universities.

To this end, in 2018, the CNPS launched a new website founding the Chappell University of Natural Philosophy. The site uses open source software and is now in place for CNPS members to start creating courses in science that allow for alternative theories and models and explanations to everything physics and cosmology.

Even though there are no courses as of yet, it stands read and waiting for us to create a university where challenging mainstream thought is not only encouraged, but a requirement.

This university breaks the tradition of thousands of years of teaching truth to students and will replace it with helping create critical thinkers who will be the great innovators of the future.

If you are interested in helping us launch this university, you can contact us at contact@beyondmainstream.org or at contact@naturalphilosophy.org and we will be glad to involve you with our Basecamp university team!