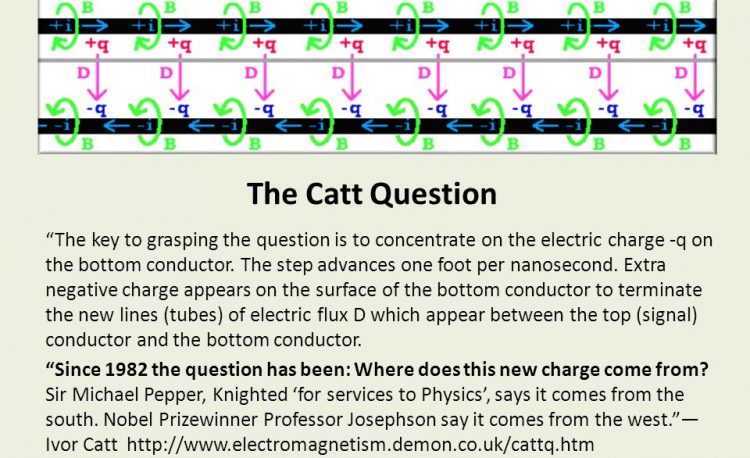 The following letter was prepared by Harry Ricker as a courtesy to Ivor Catt who wished to send a letter to the editor of the IOP Journal Physics Education in order to refute the claims made in a paper published in that journal. The letter was cosigned by five other scientists. This letter was rejected and so it is presented here. Background for The Catt Question is presented by Ivor Catt at his website.

We think that the paper “An apparent Paradox: Catt’s anomaly” by Massimiliano Pieraccini and Stefano Selleri, that appeared in the November 2013 issue of Physics Education, contains serious flaws that need to be corrected, and that it should not be considered an adequate guide or suitable advice for physics teachers. Our reasons for concluding this are: 1. It misrepresents the Catt Question as an apparent paradox; 2. It misrepresents the fundamental issues behind the Catt Question by not properly explaining the essential issues of the question; 3. The answer that is proposed is not sufficiently demonstrated in the mathematics using Maxwell’s equations; 4. It fails to properly present a solution which is based upon the principles of physics being taught to students at the elementary level; 5.The theoretical claims made regarding the nature of electricity and magnetism are incompatible with the principles laid down to students in elementary classes. This last point is the most important since students are not properly prepared for the new paradigm presented in the paper. This new paradigm is also incompatible with the currently accepted physics paradigms that are taught to students.

Regarding point 1. Catt doesn’t say there is an anomaly, he merely asks a question regarding a problem, so Catt’s Question is misrepresented in the title. The authors incorrectly say that “Catt’s anomaly is a sort of ‘thought experiment’ (a gedankenexperiment) where electrons seem to travel at the speed of light….” First, the question is not a thought experiment. It is a question asked within the context of an example problem. Second, the question makes no claim that electrons travel at the speed of light, which is impossible, it merely asks how does the charge travel along with the leading edge of the step when the step is moving forward at the speed of light, and asks how does the charge arrive at the bottom wire filling up the space required. The question has to do with where the charge on the bottom wire of Figure 1 of the paper “comes from” or how it gets there if the leading edge of the propagating step of energy shown in the figure is moving at the speed of light. The alleged answer to Catt’s question is that there is actually no paradox or anomaly. Catt never claimed there was a paradox or anomaly, he merely asked a question, posed as an example problem. The answer is to provide a solution for the proposed problem. There is a lot of information regarding the formulation of the question at Ivor Catt’s website: http://www.ivorcatt.co.uk/iop.htm

Regarding point 2. In the paper, the solution to the Catt Question was to say that the electrons follow the field, and so are not the source of the electric and magnetic fields. The essence of the Catt Question was that; Catt wanted to know how was it possible for the charge on the bottom wire to fill up the required space, within the currently accepted physics paradigm as being taught to science students. The question was formulated with an answer expected to be compliant with this constraint, otherwise the physics experts would have to admit that this was impossible, and so a new physics paradigm was required to be taught. The solution proposed in the subject paper was that the electrons are not the sources of the fields and so in doing that, the velocity of the electrons can be much less than the velocity of light. But that solution is a contradiction of currently accepted physical thought that the charges are the sources of the fields. In order to adhere to the currently accepted electron physics paradigm, the solution to the Catt Question has to demonstrate mathematically that the electric and magnetic fields can move at the velocity of light, when the sources of the fields, the electrons, do not. There was no such demonstration provided that conclusively proved this requirement.

Regarding points 3 and 4. The answer proposed by the Italians implies that the currently accepted physics paradigm is incorrect. They propose that it is possible for a large number of electrons moving at low velocities to fill up the space created in the wire, although the wave front is advancing at the speed of light. They say, “Although each single electron is not able to travel at the speed of light, a great number of slow electrons are able to produce a current as fast as an electromagnetic wave travelling at the speed of light in the conductor.” The justification for this assertion is an unclear and vague analogy, where a large number of electrons are put in motion as when in a marathon the runners all hear the starting gun. This concept is beyond the ability of students to comprehend, not only because this analogy is unclear and confusing to students, but because students are taught that it is the steady current of electricity in the wires that creates the electric and magnetic fields, while in the explanation given, it is the fields of the wave that produces the charge and current. The paper gives no physical or mathematical explanation for how this occurs. There is no electric field in the wires in the direction of charge flow shown in Figure 2 that can produce a current in the required direction, and the electric field shown is perpendicular to the wires and external to them, so it is not possible to understand how the charge flow is induced by the TEM wave shown in Figure 2. Finally, there is no mathematics derived from Maxwell’s Equations that demonstrates the model as proposed in the paper.

Regarding point 5. In elementary physics classes, students are taught that the magnetic field is created by a steady state current of electrons in the wires. In advanced electricity and magnetism courses, students are taught how to derive the fields using Maxwell’s equations from the charge and current as sources, if it is assumed that the charge and current exist in an already established steady state. The Catt Question asks how this steady state condition comes into being, and so it is a much more sophisticated question than is appreciated by the authors. They answer that the charge and current is produced by the action of the propagating wave, but they provide no physical basis for this hypothesis that is understandable within the currently established teaching concepts of electricity and magnetism.

In conclusion. The Catt Question asks a question about how the steady state electric and magnetic fields come to be established, and does not present an anomaly or paradox to be answered. When it is assumed the steady state is established, then the usual models of electricity and magnetism as taught to students can be used. However, the Catt Question deals with a question regarding how the steady state fields come into being. The answer proposed in the subject paper is beyond the ability of students to comprehend, and has not been properly answered by experts who disagree regarding its solution. This can be verified at the Ivor Catt website: http://www.ivorcatt.co.uk/iop.htm, where the conflicting proposed solutions are documented. Finally, we believe that the physics education community needs to take a close look at the role of electron current as it is currently being taught in physics classes, in order to take into account the issues that arise from the Catt Question. 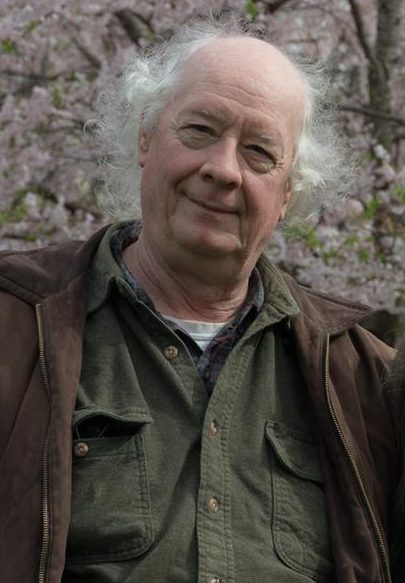